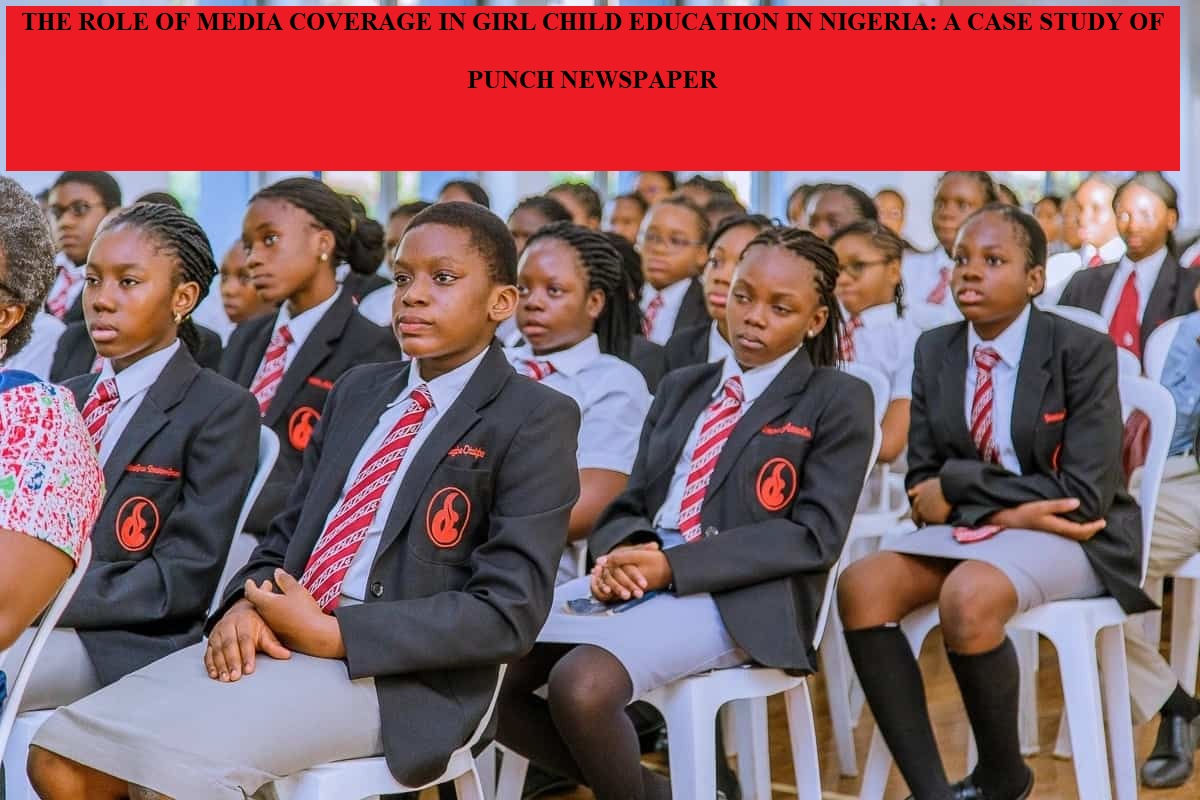 by Harrison Inyang
The Role of Media Coverage in Girl Child Education in Nigeria: A Case Study of Punch Newspaper CHAPTER ONE INTRODUCTION This chapter comprises the background statement of the problem’s purpose of the study general objective objectives of the study research questions scope and significance of the study conceptual Framework. 1.1       Background of the study For... Read More
The Role Of Women Non-Governmental Organization In Rural Development In Akwa Ibom State
The Impact of Parental Social Status and Academic Performance of Students in Economics

This chapter comprises the background statement of the problem’s purpose of the study general objective objectives of the study research questions scope and significance of the study conceptual Framework.

Globally Education is a human right that should be given to all human beings. There are lots of international human rights instruments that provide for education as a fundamental human right which include the Universal Declaration of Human Rights (1948) International Convention on Economic Social and Cultural Rights (1960) etc. Research has also shown that schooling improves productivity health and reduces negative features of life such as child labour. This is why there has been a lot of emphasis, particularly in recent times for all citizens to have access to basic education. It has however been established by researchers that improving female education is crucial for national development. Education is a basic human right and has been recognized as such since the the1948 adoption of the Universal Declaration of Human Rights.

Since then numerous human rights treaties have reaffirmed these rights and have supported entitlement to free compulsory primary education for all children. In 1990 for example the Education for All(EFA) communication was launched to ensure that by 2015 all children particularly girls in difficult circumstances and those belonging to ethnic minorities have access to and complete free and compulsory primary education of good quality. Okeke Nzewi and Njoku (2008) According to a UNESCO report about 90 million children are not in school and the majority of them are girls. Most girls do not have access to education despite the fact that it is their right. The girl-child is often saddled with responsibilities that may make her not have access to quality education. It is true that many governments make provisions for the education of their citizens but the provisions most of the time do not take into cognizance the peculiarities of the girls. In that case, the girl-child may not have access to education which is a fundamental human right.

Research has shown that millions of girls do not have access to schools despite the concerted efforts to push the cause forward. Okeke Nzewi and Njoku (2008) identify child labour poverty and lack of sponsorship quest for wealth bereavement truancy has broken home engagement of children and house helps as the clog in the wheel of girl’s access to education. The right to education which is a fundamental human right is frequently denied to girls in some African countries.

In Africa, many girls are prevented from getting the education entitled to them because families often send their daughters out to work at a young age so that they can get the additional income they may need to exist beyond subsistence level and finance the education of their sons. Abdulahi in Maduagwu and Mohammed (2006) note that the importance of education in the life of an individual cannot be over-emphasized. Central to the most basic problems facing the girlchild is her access to qualitative education. This is because without education the realization of all other rights socio-economic and political rights becomes impossible, In the typical Afrrev Laligens Vol.2 (2) May 2013.

In Africa particularly in Nigeria, education of the girl-child has not received serious attention. The general apathy in this regard especially among unlettered parents has to do with the materialistic concept of education which is the belief that the girl-child will eventually marry and leave the family with whatever material benefits derivable from her education to her husband’s home. They would rather prefer to invest in the education of the male child who is expected to marry in the family name. Traditionally the role of women has been that of home maintenance and rearing of children. Right from childhood the girl-child is prepared and trained with the ability of cooking learning and all kinds of chores in the home all directed towards a better housewife. The gender role type thus poses a bias against the girls by society. By and large, the predicament of the Nigerian girl-child is enormous.

Thus in Nigeria, the girl-child is faced with a lot of problems and constraints which act as serious impediments to her self-realization. It is therefore in line with the foregoing that we ascertain the challenges the girl-child faces in terms of education with Jos metropolis as an area of study and how the media can be used to promote the rights of the girl-child especially as it has to do with quality education.

The media have been established education has been put at the forefront of the fruits to be reaped or as an objective for the development of the media. The presumed importance of the role t h e media can play in education can be illustrated by the views of the former Vice-President of Tanzania. Sheikh A b o Ufl d Jumbe. Speaking at an African symposium on colour television jointly organized by the Zanzibar Ministry of formation and the government of the Federal Republic of Germany he pressed that in installing colour television the Government of Zanzibar’s emphasis was on education ‘in the widest meaning of the word including functional programming vocational guidance home education and dissemination of healthy political ideas’ (Quoted in Katz and Wedell,1990:).

In Nigeria, the Twining Report (1939) quoted the Interim Report of a committee on Broadcasting. Services in the Colonies (1937) which commended that radio broadcasting was to be ‘an instrument not only d perhaps not even primarily for the entertainment but for the enlightenment of the population for their instruction in public health agriculture etc. ~ educational facilities are not enough to satisfy the demand the ever-growing population of school-age children the media particularly the broadcast media) have been seen as a substitute for this formal education. This is more given technological advances which have resulted in the invention of the FM technology and the low-cost ancestor radio which can use relatively cheap batteries that have able mass communication to reach the most remote areas in the world. Since education has been linked to the creation of communication stems that can reach wide populations educational broadcasting has seen identified with development and nation-building.

Despite the fact that media houses have put measures to promote girl-child education through advertisements on television to promote girl child education and radios plays and articles on girl child education in newspapers. Several studies have been carried out showing the various well-known barriers in different regions that stop girls from accessing primary schooling. While these studies have been carried out among primary schools in the case of day secondary schools the factors are the same (World Bank 2005) Further there was high absenteeism of up to 64.2% reported being attributed to various forms of child labour. There are many studies that enlist a set of barriers that affect girls’ enrolment in schools mainly primary schools there are not many that focus on retention and completion of secondary schooling in Nigeria. According to the World Bank.

However, despite the recent reforms especially in primary education little is known about post-primary education in Nigeria. What is lacking is an analysis of how these various factors interact as lived realities of different girls as they attempt to get an education in Nigeria and other parts of sub-Saharan Africa. The mere categorization of groups of ‘vulnerable girls’ living in rural areas poor infected or affected by HIV/AIDS orphaned disabled or engaged in various forms of child labour bars policymakers and other actors in educational development work from seeing beyond these categories to acknowledging their various interactions which may be necessary for coming up with strategies to improve female education attainment. This led to the investigation of the role of the media in promoting girl child education in Nigeria taking the Punch Newspaper as a study.

1.3. Objectives of the Study

The general objective of this study was to investigate the role of media coverage in girl-child education in Nigeria taking Punch Newspapers as a study. Specifically, the study intends:

(i) To examine the roles of media coverage in girl-child education in Nigeria.

(ii) To find out the factors affecting media coverage in girl-child education in Nigeria.

(iii) To identify the possible solutions to factors affecting media coverage in girl-child education in Nigeria.

(i) What are the roles of media coverage in girl-child education in Nigeria?

(ii) What are the factors affecting media coverage of girl child education in Nigeria?

(iii) What are the possible solutions to factors affecting media coverage in girl-child education in Nigeria?