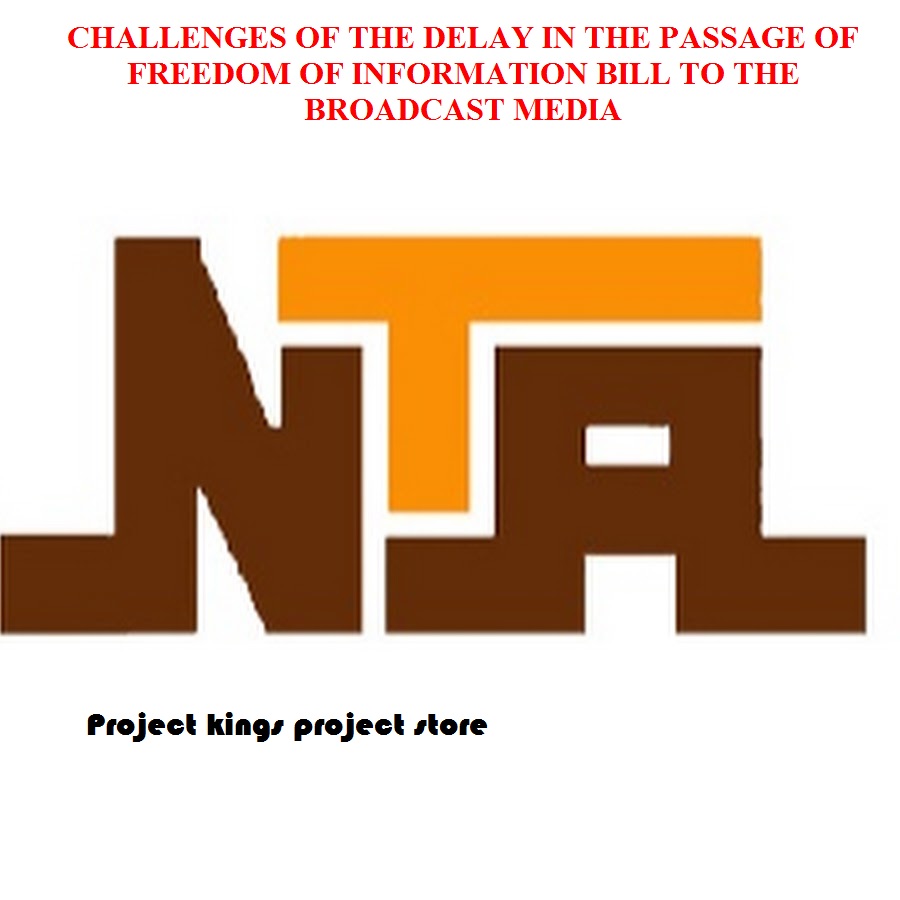 One of the cardinal points upon which Freedom of Information Bill is founded is the Promotion of an enabling environment for unfiltered access to information as it concerns the conduct of public affairs, records and documents. Considering that one of the major setbacks of the growth f the Nigeria’s fledgling democracy is the fact that most official transactions, both in public and private sectors are shrouded in secrecy. This study however, shall highlight the preset challenges of the delay in the passage of the freedom of information bill pose to the media and the society. The case study for this research is NTA Kaduna Network. The survey research method is used while the simple percentage is used for analyzing responses gotten from questionnaires administered. The sample populations are the broadcast journalist with a sample size of 100 staff drawn from the Nigerian Television Authority, Kaduna Network center. It is therefore recommended that the freedom of information will be passed into law to ensure accessibility of information by the media and the public.

The freedom of information bill (FOI) is a bill that, if passed into law, will give every Nigerian access to information, records and documents held by governmental bodies and private bodies carrying out public functions.

So far, Nigeria has no law which guarantees citizens access to public records and information. On the contrary, many Nigerian laws have secrecy clauses prohibiting the disclosure of information e.g. the official secrets Act, the criminal code, the penal code etc. Restricting access to vital information starves the press of the legal authority to publish or broadcast what they know to be true. The Nigerian press has for many years been accused of sensationalism as against fact based journalism because their reports appear to be unbacked with evidence.

In February 1962, the broadcasting company of Northern Nigeria known as BCNN was born. It was commissioned on 15th March, 1962. BCNN was established by the premier of the northern region, the Sardauna of Sokoto, Late Sir Ahmadu Bello. He wanted a medium through which he could sell his government’s policies and bring development to the whole North, because he felt that the existing Radio Station, the NBC was not giving adequate coverage to his government and indeed the activities of the Northern region. The station started in monochrome. In 1963, the RTK (Radio, Television, Kaduna) arm was established, the combination was known and still remained as RTK (Radio Television Kaduna).

The television arm was exercised from the former broadcasting corporation of Northern Nigeria (BCNN) with decree No. 24 of May 1977 which took effect retrospectively from 1st April, 1976.

The objective of NTA is derived from the overall aims of broadcasting in Nigeria. As a medium of communication, television seeks to enrich life of the average Nigerian by influencing positively his social cultural, economic, political and technological thinking. It also brings news and information about national issues. Besides this, it serve as a source of entertainment. Television promotes cultural awareness and seeks to preserve Nigeria’s rich culture.

Through this medium, artistic and intellectual creativity are development. Therefore, all programmes and coverage should be audience-oriented and guided by the nation’s social, political, moral, cultural, scientific, educational and economic goals.

Vision and Mission of NTA

Vision: “To be a world-class television Network”.

The news department is responsible for News and current Affairs programmes. It is statutorily vested with the responsibility of gathering end broadcasting News from all sources within the country, some of its star progrmmes are news world, weekend file, Guests of week and issues of the movement.

This department is the human resource and personnel arm of the station. It is in-charge of policy interpretation and implementation.

This department is responsible for managing the finance of the station.

The marketing department is responsible for the marketing and advertising activities of the station.

For over eighty years, the protagonists of the freedom of information bill have been toiling to get passed at the National Assembly. The bill was presented initially in 1999 when the return to democratic governance heightened the expectations that three will be increased disposition towards free information access by those in power.

By August 2004, the House of Representatives passed the freedom of information bill and two years later by 2006, the senate by a consensus vote passed the same bill. the general problem is that corruption in Nigeria is endemic pervasive and deep-noted in the nation’s polity.

How easy will it be for the people who are corrupt to be the same people called upon to eliminate/minimize corruption? Unless the lid is opened on the activities of corrupt public officials, it is most likely to abate. Thus, this regard investigation is to examine the challenges of the delay in the passage of freedom of information bill to broadcast media.

This study aims at:

(i)      Depriving the media the legal authority to publish what they know to be true.

(ii)     Deprives the media the right to publish or broadcast fact-based reports.

(iii)    Causing a major set-back to the growth of Nigeria’s democracy because the most official transactions, both in the public and private sectors are shrouded in secrecy.

The research will however provide a premise for the applicability of the findings to other Nigeria media.

HO2: The FOI Bill will promote transparent and accountability in governance.

HO3: The FOI Bill will give the broadcast media the legal backing to transmit public information

HO4: The FOI bill  guides against the misuse of accessed public information.

R1: What are the challenges the FOI bill pose to the broadcast media?

R2: What are the legal loop holes the FOI bill covers, that the constitution does not cover?

R3: What are the benefits of FOI Bill?

Harrison Inyang
The CEO of Project Kings research center, a renowned research writer, a teacher, a poet, a philosopher-king, and a student of the Platorian school of thought. I believe in the law of Karma
View All Posts by Author
Visit Author Website
Library Resources Utilization and Academic Performance among Students of Economics
Previous Post
A BRIEF REVIEW OF SELINA TESTED