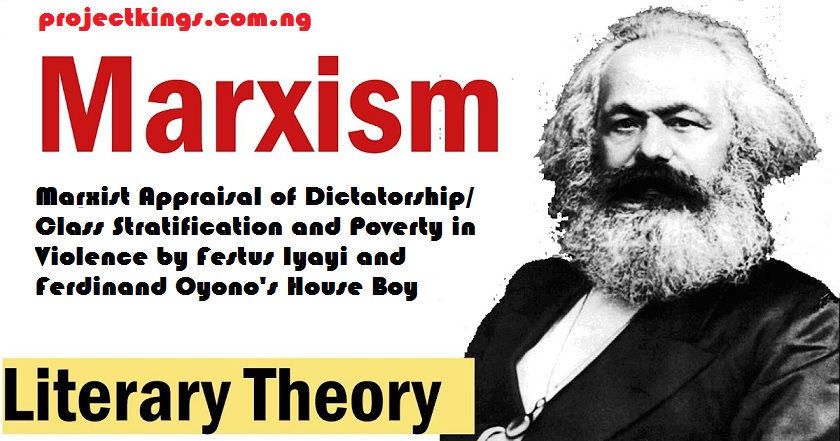 by Harrison Inyang
Marxist Appraisal of Dictatorship/ Class Stratification and Poverty in Violence by Festus Iyayi and Ferdinand Oyono’s House Boy   CHAPTER ONE INTRODUCTION 1.1 Background to the Study Although Poverty, unemployment and other forms of economic inequality are worldwide phenomena, most nations of the world with little or no natural resources have always find ways to... Read More

1.1 Background to the Study

Although Poverty, unemployment and other forms of economic inequality are worldwide phenomena, most nations of the world with little or no natural resources have always find ways to better the lives of their citizens. On the other hand, Nigeria with its abundant natural resources have always maintained an undignified spot, a top from bottom position in the United Nations Multi-Dimensional Poverty Index.

a staggering 112.519 million Nigerians live in a relative poverty condition. This represents the 69% of the Countries total population estimated to be 163 million (The Nigerian insight, 3 Feb.) Unemployment also drive on the same lane with poverty at an alarming speed. In NBS report in 2015, “there were a total 19.6 million people between the ages of 15-65 either unemployed or underemployed in the labour force in q2 (second quarter) 2015, compared to 17.7 million in q1 in 2015” (daily post, 3 Aug.).

With this ever faithful decrease in better life of the people, the successive Nigerian governments seem to lack clues on how to get things right. This is what made the Vice President, Prof. Yemi Osibanjo to assert that:

When you look at the economic and social policies, and you look at the levels of illiteracy in parts of the Country. Some at extremely bad and some with cases of about 80% or 90% of Children out of school and other cases of unimaginable decayed infrastructure(Vanguard, 20 Aug.).

He went on to lament that “governments have not been accountable to the people; the policies should have roots in the conditions of the people”

When the governments have failed to uphold their responsibilities and the gap between the “haves” and the “have-nots” keep on skyrocketing, it is the place of the writer and the critic as watchdogs of the society to speak for the downtrodden. According to Achebe in Morning Yet on Creation day, “the writer cannot expect to be excused from the task of re-education and regeneration to be done for he is after all — as Ezekiel Mphalele also puts it in his “African Image” – the sensitive point of his community” (103)

Ngugi agrees with Achebe and encourages an artist not to shy away from his duty. He urges the writer to create awareness of the forces of oppression in the society and prescribes Marxist ideology as solution to the problems. In “Writers in Politics” he writes:

What the African writer is called upon to do is not easy: it demands that he recognizes the global character of imperialism  and global character of imperialism and global character or dimension of the forces struggling against it to build a new world. He must reject, repudiate, and negate his roots in his native bourgeoisie… he must write with the vibrations and tremors of the struggles of all the working people in Africa, America, Asia and Europe behind him. Yes, must actively support and in his writing reflect the struggles of the African working class and its peasant class allies for the total liberation of labour power. Yes, his work must show commitment, not to abstract notions of justice and peace but the actual struggles of the African peoples to seize power and hence be in a position to control all the forces of production. (79-80)

The above mandate from Ngugi summarizes the position of Festus Iyayi and Ferdinand Oyono’s and goes on to bear witness that they did not answer the call as just writers but as Ngugi puts it “actively support” (79) the oppressed in their various literary exploits.

Festus Iyayi’s approach to the struggle is a peaceful protest through organised industrial action and outright rejection of all forms of moral ills of bribery. This is evident in his leadership of Academic Staff Union of Universities (ASUU). This is also exhibited in Violence when the character of Idemudia led the struggling working men with dogged moral uprightness against the corrupt capitalist oppressors represented by the character of Madam Queen Obofun.

Tanure Ojaide’s approach is a presentation of the evils of Federal government and the Multinationals – Bell and O&G meted against the people of Niger Delta awakening the consciousness of the people. This is seen in the character of the Activist who gradually awakened the consciousness of the Students of Niger Delta State University to the cankerworm eating up their land and sea.

1.2 Statement of the Research Problem

Exploitation, poverty and class stratification have eaten deep into the heart of Nigeria socio-economic milieu. Festus Iyayi and Ferdinand Oyono have artistically highlighted these problems which the researcher sets out to investigate.

African writers had had a large extent focused in their writings to the social injustices of the poor and calls for a classless society. Iyayi and Ferdinand Oyono are such African writers who ambitiously tackled the question of a dilapidated society punctuated by exploitation, poverty and disillusionment. They interpret their societal events in an unfortunate way.

Their two novels therefore explores different dimensions of violence inflicted on the individual in their society, such as the lack of development, fragmentation, the quest for wealth, the soured relationship between the employer and the employee and the gulf between the rich and the poor and urges the masses to embrace revolution as a way of reconstructing their rights through social reality of chasm between the rich and the poor.

1.3 Purpose of the Study

Against the background of the problem, the purpose of the study is to shed more light on the issue of Marxism in Nigerian Literature and to reveal through the works of Festus Iyayi and Ferdinand Oyono’s that instances of class stratification, exploitation and poverty are predominant socio-economic problems in Nigeria. Their effects on the lives of Nigerians are pathetic. So, this study breaches the wide gap between the “haves” and the “haves-nots” in order to achieve a state of socio-economic equality.

1.4 Significance of the Study

The findings of this research will be of great benefit to the society considering the fact that exploitation, poverty and class stratification are predominant issues in our society .Therefore, this study will breach the gap between the rich and the poor in our society. It will awaken the consciousness of Niger Delta masses who have been shortchanged by the Federal Government and Multinationals thereby attracting a more lasting solution than the temporary amnesty program. It will finally bring about a social justice in general to our society that strives on social inequality. To the researcher, this study will help him uncover critical areas many researchers did not explore.

The theory we have adopted for this research is Marxism. Marxism is a movement that is founded upon ideology of emancipation of the working class.

According to Karl Marx:

All historical societies contain basic contradictions. These contradictions involve the exploitation of one social group by another… these creates a fundamental conflict of interest between groups, since one gains at the expense of another. This must ultimately be resolved since a social system containing such contradictions cannot survive unchanged. (Hararlambus and Holborn 9-10)

These “groups” that are in “fundamental conflict of interest” (9) According to Buah, in The World Since are “the people who own the means of production and the people who provide the labour” (125). Buah sheds more light on the conflict when he further explicates that:

Although in minority the people who owned everything needed men for their livelihood had always played the role of masters. The other class of people who formed the bulk of the world population, had nothing which they could call their own. Their lot had always been to work for the Masters and to remain poor earning just enough to keep bone and flesh together. In ancient times, they were the slaves, in Middle Ages, they were the serfs, and in Modern Capitalist countries, they were the wage earners often called the working class. In advanced books, they are often referred to as the proletariats, which comes from proles, a latin word meaning “children” (125)

This Marxist ideology is chosen for this study not only for the fact that instances of class struggles and oppression dominate our social milieu but for the fact that it can provide a lasting solution to this socio-economic malady our country is suffering from. Ngara upholds the above when he opines that Marxism “is not just an alternative technique for interpreting Paradise Lost …it is part of our liberation from oppression and that is why it is worth studying at book length”.(7) Charles Bressler also gives vent to the above when he says that:

society shapes our conscious, that social and economic condition directly influence what we believe and that Marxism offers us an opportunity and a plan for changing the world from a place of bigotry, hatred and conflict resulting from class struggle to classless society where wealth, opportunity and education are actually accessible for all people.(115)

Festus iyayi and Ferdinand Oyono’s found themselves in a society that is characterized by intense socio –economic inequality featuring the oppressed and the oppressor, combated it with ideological weapons often found in their write ups. That weapon is Marxist ideology. This is in line with Nwahunanya’s view on literature and society when he posits that:

creative works of literature are products of the society’s libido. The psychological approach may illuminate the creative process but the going on in the psyche itself are not central as such to literature since they are only preparatory   to the act of creation and psychological truths become artistic values only if they enhance coherence and complexity in a work. (36)

This study shall be those instances of oppression and injustice highlighted in Violence by Festus Iyayi and House Boy by Ferdinand Oyono’s and how these issues have affected Nigerian masses. The choice of these works is because the authors through their above mentioned novels raised issues of national importance.

A BRIEF REVIEW OF SELINA TESTED
Previous Post
The Impact of Library Resources Utilization and Academic Performance among Students of Economics
Next Post
You May Also Like
Lexical Patterns In African Novel: A Case Study Of Festus Iyayi’s Violence And Ngugi Wa Thiongo’s Petals Of Blood
0 Comment